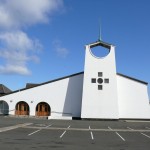 The Presbyterian Church had an interest in Monkstown since at least 1855 when a school was erected for religious and secular education, and both Carnmoney and Whiteabbey churches were involved. With huge changes particularly the building of a large housing estate, new things began to be explored in 1966, including a joint venture with the Church of Ireland and Methodist churches.The first service of the Monkstown Church extension took place in April that year in what became known as the Upper room – above shops on the Jordanstown road. By June growth resulted in moving to Monkstown Primary school. By 1967 a house on bridge road was rented for some activities, by 1968 a wooden hall was erected on land which had been bequeathed to the congregation, and by 1969 another house which became known as Abbey house was left to the congregation. By 1970 the new church building was erected including the new concept of the moving wall. Much later some land, including the site of the wooden hall and Abbey house were sold for development and the new halls were built connected to the Church.

Of course the Church is people, not buildings; ministry and mission, not activities. Under the ministries of Rev Alick Cromie (1966-71), Ernie Brown (1971-86), John Seawright (1987-2013) and Alan Carson (2015 – present) and the congregation, Abbey has sought to be faithful in sharing and showing the good news of Jesus in Monkstown through changing times.

Verse of the day